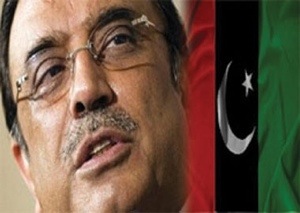 Pakistan People’s Party is the worst thing which could have happened to Pakistan in my view. First due to their timid leadership in face of Zulfiqar Bhutto cost us half the country where he instead of showing political brinkmanship should have arrived at a political agreement to share power with Awami League but we all know what happened. Then it gifted us one after another corrupt governments which every time broke its past records and gave us some prominent corrupt politicians like Asif Ali Zardari aka Mr. 10 Percent.

And now they are yet again writing a new chapter in the history of Sind province where they are trying to bull doze the mandate of Urban Sind. I have said this before and would say it again that how come PPP which has failed since inception to develop rural Sind in terms of any projects let it be government money or private enterprise. What experience they present to develop one of the largest cities of the world i.e. Karachi. I doubt if they can even develop Hyderabad or Sukkur. Some may say it’s a harsh statement to make but then when I see the poverty , backwardness and misery in the rural Sind . It speaks volumes of the leadership of PPP. Again, if that’s true than how come the children of the leadership, their homes and even their investments are in Karachi and not where they belong from. They only use poor Sindhis for votes and slavery and nothing more.

Now I don’t doubt the individual officers and some of them are really good but as for the leadership. Its hijacked and is the manifest of a few and the good educated lot suffers the most. Today as I write this piece there is a ticker running on the TV that PPP has again bull dozed the SLGO (8th Amendment) Ordinance 2013. For me today i.e. as on 20th December 2013 any trust on PPP sincerity with the Urban Centers of Sind and even their alignment to common man’s democracy is gone. Though passed by the Sind Assembly amongst the chaos with majority but the attitude of not paying heed to the largest city of Pakistan’s mandate gives one message that a corrective step is becoming the need of the hour administratively in Sind to embolden the republic of Pakistan. I think with every step PPP shows their insincere attitude towards the republic and why would they as they blame the hanging of their founder on the establishment and the death of Benazir Bhutto again on them. The need to say Pakistan Khappey by Asif Zardari when Sind out of emotions was chanting slogans against the republic speaks volume of their sincerity towards Pakistan. We are all reading the emergence of Sind Liberation Army anyways.

Curious to know more about the commotion and the eventual impact on the future of my beloved city . I had to call a few friends in the city & especially someone working in the government to find out that how this new ordinance would bring a positive change to the future of the city apart from possible political corrections. Now what I heard made me hate PPP more but again lets look at it with a subtle approach.

The view was Local bodies and its types are always a gift of dictators to bolster their control on the gross root politics however Gen Musharraf’s effort was more to strengthen the federation means his was a sincere effort to take the power and give it to the people. If you see that as the reason he is suffering this fate today at the hands of the same who saw him almost having achieved the goal of empowering the masses. The government officers were no more than clerks in his envisaged set up with lesser opportunities to earn. Yes, that was one reason that they ensured that at a minor outset of revolt against him. All these officers sided with the miscreants for his sincere patriotic effort.

Now under him when Local Bodies ordinance was executed . Some delimitation happened with the intention of giving benefits to rural areas with the infrastructure of the urban areas or what ever was possible. Now as we all know that Karachi saw in the first LB elections when MQM boycotted JI winning and in the second one MQM winning. Both parties originating from the Urban Centers of Sind and PPP having no role in the same was a political set back . Again , as we can see that PPP has lost control in Karachi and the single or so seat they have in Lyari is also held by gangsters. Now PPP who has been rejected across the country is trying to find its footing and for the same purpose is targeting Karachi for the same. The second reason is that all investors are not interested in the Rural Sind due to its poor management which means no money as corruption for PPP in the future and since the income should continue . That is the reason they now want to control Karachi so that their income keeps on going.

What I found to my horror that one effect of the new ordinance is that the electorate which is going to elect the Mayor would come from UC who might not have the same population proportion. Meaning an outskirt village of Karachi in a UC with a population of 10,000 and a densely populated area like a UC in Lalu Khait with 50,000 population would have same weight age means the mandate of Urban centers of Sind further gets degraded.

Further, the Deputy Commissioners who are actually employees of revenue department and are either political or paid appointments would be the returning officers of these elections instead of members of judiciary as the 18th amendment has taken away that provision of provincial election commission and the election commission of Pakistan has no representation in the LB’s and hence the Sind government as per the SLGO intend to use these DC’s who also have power of rejections or suspensions of the candidates. Now imagine that how can you have free and fair elections with this set up as Mr. Bhutto in the 1973 constitution also took away that protection from such appointed Deputy Commissioners who were guaranteed minimum tenure of appointments. All DC’s who even if they want out of honesty if raise their voice against the rigging can be under threat of being transferred prematurely, suspended and even fired. So why these returning officers would stand up to the hegemony of PPP who intend to rig these elections to their choice as one senior Minister i.e. Manzoor Wassan and Sharjeel Memon were heard declaring that the next Mayor of Karachi would be from PPP. This shows clearly that PPP has already planned to rig these elections. Out of their own selfish interest against the same principals of democracy their leadership is heard beating the drums until recently the baby Zardari who offers us comic relief every few days to relieve us of our stressful lives. They have definitely used democracy of their choice to take revenge on Pakistan and especially Urban Sind.

One more thing which was surprising that the panel format in the UC’s might not at all see the smaller parties getting elected in the UC’s creating more hegemony for the majority and no room for opposition. Reason why PML F and others have joined in hand with MQM against this hurriedly execution SLGO.

Further, to my knowledge that PPP who talks about fighting terrorists have gone to the extend of shaking hands with fundamentalist parties to some how get into power in these elections with alliances. In the recent operation the release of some arrested of such groups would see PPP get into power as part of a deal with them. The reason is simple that since they have been kicked out all over Pakistan and have no major source of revenue for corruption. Getting hold on mayor elections is key as this is where the money and power would lie. The selfish politics of PPP which saw Pakistan broken into two parts in 1971 and looted over the last few decades . Want to do politics of consolidation of power and that’s it.

Since these elections are being enforced by the Supreme Court ruling. PPP is trying its best to derail the process by bringing such hurried ordinances to find ways to either get these elections if not indefinitely postponed or ending up with their victory if at all to be done. I am sure if MQM would have joined treasury benches in the provincial assembly such ordinances would not have been brought upon. This shows clearly how PPP uses blackmailing tools upon other democratic parties.

Elections under such rules, conditions and on top with an politicized operation would not be very beneficial for the future of Sind. I am sure administrative correction should be done to give rights to Sind Rural without destroying the structure of Sind Urban.

In the end when I asked my same friend at a senior post in the government. So does he think that this SLGO, this delimitation and this antics would serve any purpose and would serve the common man and help him in his efforts to solve issues especially of rising pollution, sanitation etc. In return I got a long hush . There was my answer and cleared any doubts in my head that all the turmoil seen in the Sind Assembly is not without reasons.

Yet again PPP is putting in effect another political card which may see them in power but weaken the strength and functionality of the nation to perform at its best with such forums. As the only agenda they have is Lutto tey Phutto and then G.A. Bhutto. I am sure people of Sind would wake up to this reality and rise for getting rid of the feudal party like PPP as slowly all other parts of Pakistan have thrown such mindset out. Pakistan Zindabad!