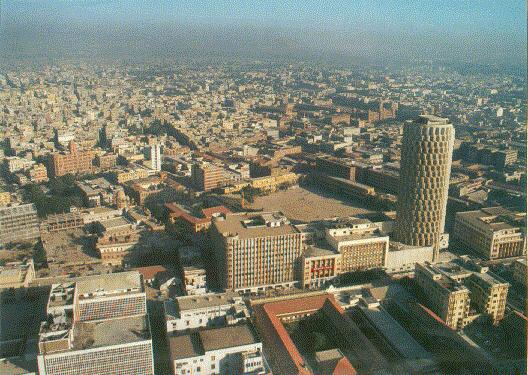 To understand Karachi . You must know its history . Its intentional and unintentional demographics . The city has seen many experimentation in the last many decades. The perpetrators have been the same. The objective have been the same. Control! Control the city and its resources at any cost . Means any cost.

Time and again the same has installed their viable solutions in the city. Hoping that their plans remain in the play. The cost . Thousands of lives lost. Billions of rupees lost. Thousands orphaned or widowed. The city got divided. The richer got rich. The powerful got meaner. The weaker became vulnerable. Sometimes I feel that as some thrive in this chaos in the city as the black market, corruption and mafias thrive with it . Hence the city remains or let remained in chaos. Those planning this wishes the chaos to remain . Hence the “ Chaos theory of Karachi” .

The Soviet-Afghan war saw the city further religiously radicalized and it saw that the same elements against the formation of Pakistan becoming its greatest patriots and suddenly saw the opportunity to cash their fortunes to politically radicalize the city.

In the 80’s ; the nation which was still reeling from the shock of 1971. Recovering from the Baluch uprising . Saw further fissures due to the international players who wanted to weak Pakistan having a frontline role in the Afghan Jihad. We never realized and formed a singular strategy to focus on the religious angle as the nation got further radicalized. The hanging of Bhutto saw Sindh getting disenchanted as well . The establishment feared a Sindh Card coming up. Unaffordable at all costs as the nation could not even think about losing another port since its creation.

I think the British left us . But left a few legacies for us . The biggest one being “ Divide & Rule” . The establishment implemented that in spirit as they gave room in my opinion to the disenchanted Muhajir community to form their own party as MQM. The Sindh card saw PPP’s play getting diluted but created room for them to come back in the mainstream politics with Benazir coming into power.

The Muhajir community became stronger more than to the liking of the establishment. Enough was enough & they again played the card of “Divide & Rule” (We will be using D&R going forward). Best is to dilute this force and formed a new faction : MQM Haqiqi. Felt that lets keep Muhajirs chanting for their rights and offer a weaker representation in form of Afaq Ahmed & Co. The plan failed. Somehow MQM survived after losing thousands of workers and residents of Karachi as a consequence. A weakened MQM seemed to be acceptable for the establishment. But as they focused too much on Karachi; PMLN became stronger & almost implemented the hard core Caliphate in Pakistan and in fact unexpectedly tried to take out one of their own. Unacceptable. How dare they ? A Martial law got imposed.

Well I frankly didn’t like Nawaz too much on his handling of Kargil issue. I was over patriotic at that time and was upset on this and supported the Military rule at that time. The Politico of the country didn’t feel comfortable as he center of power shifted from Raiwand or Bilawal House to GHQ. The establishment knew that if they controlled Karachi they control Pakistan. They needed MQM again for this . They thought a weakened MQM could be a great ally. The accusations of sedition and RA&W became immaterial . MQM was key for the road ahead. Simply “On boarded” .

Again MQM started to become stronger. Looked like to mature politically as well. Meanwhile ; some idiots who think that they are Muslims decided to kill thousands of innocent in a plane crash . This time the allies in the form of Talibans again faced beating . The brother Jihadists need to be protected. Keeping them at the borders or KPK had a possible consequence where the government feared that the world anger could start to see direct confrontation spilling across into Pakistan’s borders. Best was to keep them as far as possible as no one would attack an urban center. Why not Karachi as Lahore was too dear as many relatives lived there and Islamabad was impossible as many deciding lived themselves there? Also, another advantage would be that there would be someone to keep a check on the rising MQM. So sorted and executed. The city received its first wave of the gifts of wars in Afghan war number two. Land grabbing, control etc etc. grew as the indigenous population felt threatened. In my view Karachi against abused like in the 80’s.

Let’s not forget the Lawyer’s movement against the establishment. The showdown again happens in Karachi where dozens of its sons give up their lives defending the throne of the establishment. Naïve not to realize that they are nothing more than puppets. Years later the nation healed ;the rulers disposed off but Karachi still bleeds of that incident and it echoes. All non Karachi players ; officially or otherwise absolved. Karachi and its sons continue to pay for their loyalty.

As Gen Musharraf got disposed off unceremoniously . Being a first General to face this fate. I guess being a Muhajir and Karachiite. PPP took over. Hungry to the core as earlier looted coffers dried up and had to be replenished . Again Karachi came in play . The city needed to be recovered from the claws of MQM. Unless that PPP could not encash the richest cash cow of Sindh or Pakistan. New experiments seen. People’s Aman Committee, Liyari Aman Committee, ANP, Talibans, Jihadists & Other religious parties started to get re-enforced. But no avail. Though thousands lose their lives in the process.

What to do ? Nothing seemed to work. A strong unified MQM will not give that absolute control over Karachi. Chinese needed the city to support their expansionist plans. They needed a sorted Karachi. What to do? Lets attack MQM again. This time a saint named Imran Khan was sent it as PTI. Muhajirs got inducted at lead roles at the top though the second tier came from non Karachiites. A ploy to break Muhajir unity. Again didn’t work. How come it will? If someone admonishes Muhajir community. How will it ever work ? Plus the leadership being Pashtun. Reminded Muhajirs of the Aligarh colony massacre and the Sohrab Goth and Katti Pahadi etc etc. Again an experiment failed.

But all this chaos kept on building a solid case of high handed intervention in the city. Rightfully so as the law and order deteroriated of the city with crime seeing its height. The Chaos Theory seemed to be working.

The APS massacre created a wonderful opportunity to get in. The blood of innocent kids paved pay to go to Phase II of the Chaos theory in Karachi. Absolute Control! Chinese needed to be comforted as the billions needed to be rolled in the country. MQM still a problem. Looking ominous now as they start to insist on more rights as Quota system continues, investment in the city dries out, PPP’s Sindhi influenced politics further disenchanted Muhajirs. MQM started chanting for province. Unacceptable!

What to do ? Break them more. Haqiqi failed, PTI failed, Others failed. Break MQM again from within. Create PSP. A new party with the same set of working model only distanced from the Muhajir sentiment. Nothing wrong as Pakistan’s progress is key. But we saw again PSP becoming an anti MQM ploy & nothing more. PSP fails to launch. Muhajir vote remain disenchanted. Need another plan. Urgency is immense. CPEC needs to kick in. World political dynamics changing. Our neighbor i.e. India becoming stronger by the day. Iran coming back into the foray as US sanctions lifted. Pakistan surrounded by 3 neighbors who are not very friendly. The only solution is to reinforce China and why not? The only ally left as even Middle East distances away due to Pakistan non participation in the Yemen conflict.

Do I think that this is the end of it? No it isn’t . It may see a break for a while. But will it be permanent. I doubt. Peace in my view is not enforced . Its achieved. It can be won not at the cost of bullet or coercion but can be only obtained by giving rights and reducing the opportunity towards contempt.

I wish Pakistan well as I see and am excited with CPEC dollars rolling in. I am sad not to see any positive implications of which in Karachi. I hoped that with the new Mayor elected. The federal government could have injected some money rolling in to develop the city. I doubt that it will ever happen. Because I don’t think that the establishment is sincere towards seeing Karachi grow. As far as MQM is concerned ; the party in its current form would see challenges . But would it die down. I doubt as Muhajirs remain disenchanted.

The Chaos Theory in Karachi has reinforced the consolidation of power of establishment in the city as political players vanish . The logic of D&R worked. But is it long term in the interest of Pakistan? I doubt again. The constitutional amendment 18 was supposed to decentralize power has on the contrary created more chaos as the fissures in the federation grow. I feel that if Karachi is such critical than why not made again a Federal territory. Since I feel a separate province is becoming a lesser possibility. I further recommend that the CA 18 is abolished. A Truth & Reconciliation committee beyond the interest of KPK should be formed that people brought back into the play.

I don’t think that it’s possible with the current set of political leadership . I hate to say but I feel a sincere technocrat government takes over with the specific agenda to address inter provincial grievances, equal distribution of wealth , resources, power and justice should be ensured. People empowerment , accountability and rehabilitation should be the key objective. Time bound set up for 3 years before the reigns of the country handed back to only the clean political leadership of the country not just focused on Pakistan.

Quaid e Azam’s Pakistan can only be achieved if its implemented in true sense and spirit. The Chaos Theory should not be restricted to Karachi if felt useful but must be spread across Pakistan. A better Pakistan. Pakistan Zindabad!