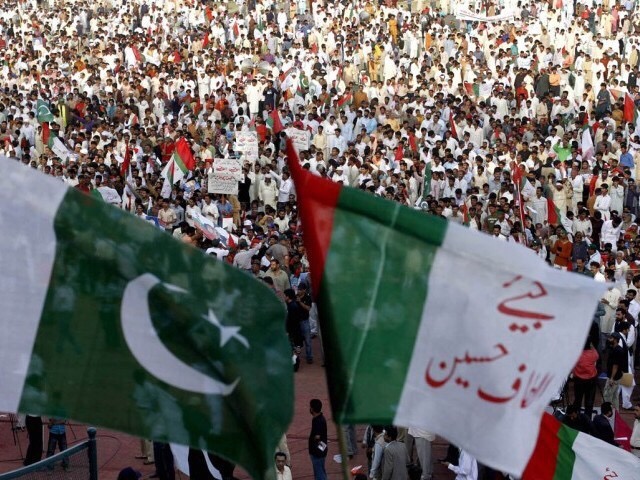 I live in a country where the Bureaucrats blame the Politicians of all ills. Politicians blame the Army (due to the past Martial laws). Army blames the Civilians (for not voting Politicians of their choice) . Civilians blame all 3 i.e. Bureaucrats, Politicians and Army (though Army gets less of the ire due to their divided role between politics and war). There is Media who ensures that everyone blame each other so that they can keep on getting fodder for their news. We also have the Judiciary whose adrenaline rush came and went with Ch Iftikhar and are waiting for another such but think must wait for some time.

But there is one party which unites all of them when it comes to the blame game. That is none other than “MQM” . The passion, the emotion, the valor and the enthusiasm with which everyone unites to spill out their guts against MQM ; if seen by the soul of late Quaid e Azam Muhammad Ali Jinnah . It would definitely make him cry (I meant his soul) . He would cry out of pride that there is something which unites the nation whilst they fight over everything else and definitely not like animals. But he would also cry that the nation unites against the posterity of those who challenged the British Raj for a separate Pakistan and left all they had for the same. Whilst millions did stay behind.

There are long lines every where in Pakistan. Outside Petrol Stations, in the hospitals , in the courts , for the metro buses , in the grave yards , out side at water taps or waiting list of water tankers ; even for electricity . There is another line . This line is comprised of those people who are distributing certificates of patriotism to others; so that you are not considered a Traitor under Article 6 of the country. The most popular Article now a days. “Article 6” . Hmm why this most important Article was thought of at number 6 . Not later lets say number 10 or 11 etc.

Well in my humble opinion. As the current form of constitution was drafted before yours truly was no where to be even conceived. The history books say that the Pakistan which Quaid e Azam Muhammad Ali Jinnah won along with millions of Muslims of India was lost in 1971 as the nation was playing musical chairs between Bureaucrats, Politicians and the Army. The people who made it were feeling left out. Lets not forget the very Muslim League of which dozen of factions exist today was formed in Dhaka in 1906. Lead by the prominent Bengalis of that time.

The Nation badly needed the constitution to heal and rise . So in 1973 everyone who was left in Pakistan (which is West Pakistan) agreed to form finally the first constitution of the country after 26 years of its creation. Now since the nation was coming out of a mutiny the foremost thing was to ensure the Patriotism . The politicians wanted to ensure that they continue to govern as the nation as marred by at least 13 years of Martial Law as the constitution was to get formed. We would evaluate few articles to understand what is really “Treason” & who is it applicable upon.

The first 3 articles are superlative. But when we look closely to Article 4 which says “Rights of individuals to be dealt with in accordance with law” I would stress on its Part I i.e. “To enjoy the protection of law and to be treated in accordance with law is the inalienable right of every citizen wherever he may be and of very other person for the time being within Pakistan” . Lets read its Part ii (a) as well which says In particular “ no action detrimental to the life , liberty , body , reputation or property of any person shall be taken except in accordance with law:”

Now lets quickly look at Article 5 (key to understand for this topic) “Loyalty to state and obedience to Constitution and Law” . 1) states “Loyalty to the State is the basic duty of every citizen” and 2) states that “Obedience to the Constitution and law is the [inviolable] obligation of every citizen wherever he may be and of every other person for the time being within Pakistan” .

The famous Article 6 is defining “High Treason” 1) Any person who abrogates or attempts to conspires to abrogate , subverts or attempts or conspires to subvert the Constitution by use of force or show of force or by other unconstitutional means shall be guilty of high treason” . Part 2 of the same article touches upon those abetting in Part 1 and Part 3 talks of Parliament (Majlis e Shoora) by law provide punishment of High Treason. Article 8 till 40 talks of our Fundamental Rights & Principal of Policy .

So the constitution in its flow . First talks under Article 4 talks about rights of every citizen’s protection & his treatment . Right to live , liberty , body and reputation. Than after the state ensures all this comes Article 5 which than demands of its citizens “Loyalty”. The article 6 in my view cant be imposed on common citizens but on those only who control power to abrogate the constitution vide their office or vide force.

I am sure I have been able to put the understanding simply for all of you. Now if the above is clear . I have a few questions to ask of the Citizens of Pakistan ?

– Has the state been able to safeguard the rights of its Citizens in Karachi and especially the workers of MQM and its leadership in view of Article 4 Part I & II?

– With thousands dead in Karachi (Sind & Baluchistan) due to the various forms of violence inclusive of state violence where the life and liberty have been taken away. Has the state not failed to protect the rights of its citizens?

– Article 5 . Isn’t this applicable to all the citizens of Pakistan? Especially part ii of Art 5 which expects obedience of the constitution by every citizen of the country. So aren’t those in violation of citizen’s rights under Article 4 not punishable or questionable under Article 5 ?

– There has been a lot of talk of treason. But as I understood Article 6 . This is applicable on those only who violated the constitution by imposing lets say Martial Law etc (twice since the formation of the 1973 constitution) . Not on common citizens. Is my understanding correct ?

Now in view of the above questions. Lets evaluate the case of QeT Altaf Hussain who is being discussed every day on the media like National Anthem since the last many years. I chose to write on this as I am sick and tired of persecution of MQM and its leadership day in and day out. Wanted to document my thoughts in line with the constitution of the country to which I have taken oath to . Not what PMLN or PTI or any Agency Chief thinks .

First, “Citizen” . If the state accepts that QeT Altaf Hussain is a Citizen of Islamic Republic of Pakistan on whom the Constitution is applicable though it states that the Articles are applicable “Within Pakistan”. If the state accepts him as its citizen . Please issue Mr. Altaf Hussain his National ID and Passport right away before holding him in abeyance responsible for the said constitutional responsibilities.

Second, “Life , Liberty & Reputation” . The daily disappearances, extra judicial killings, forced confessions and daily media trial without the cases even going to the courts . Are these not in violation of Article 4 for every MQM worker affected by the state violence since 1992. Killed in thousands with hundreds missing. The media trial or abomination by state institutes inclusive of ministries . Isn’t it in violation of distorting the reputation of its citizens. Inclusive of Mr. Altaf Hussain? I am yet to see any pardon for which.

Third, “Treason” . I would like to ask the state how many of Pakistanis have been persecuted under Treason till date. I am sure that the whole nation is not functioning normally and MQM or Mr. Altaf Hussain is not the only reason if I am to belief the argument for all the ills the country face. Please share with us the list of 3 such individuals. Now don’t tell me there are none. As there has been 2 Martial laws and an attack on Supreme Court in 1997 . Why this article is not applicable on common citizen? If yes, than why Mr. Hussain is being threatened of treason as neither he is a Member Parliament or has ever been in a position of governance. MQM is only 7-8 % of the parliament and restricted to Sindh only (for now) . Than how can they be answerable for Treason under Article 6 in its current form. Shamefully , some in media and even parliamentarians refer to Article 6 being applicable on Mr. Altaf Hussain (by passing resolutions) and MQM as neither have ever reached close to abrogate the constitution.

Fourth, I would like to touch upon Article 19 “Freedom of Speech”. For a moment lets assume some one makes a speech which is not acceptable to a few. Where it is written in the constitution that its an act of Treason. If Mr. Altaf Hussain is asking for his and his worker’s fundamental rights thinking that he is living in a democratic country and he and his workers are Pakistanis. Only when they are not met and abused; is chiding for it. Than how is it an act of Treason. Isn’t the act of Treason not applicable on those violating Art 4 and 5 of the constitution. Though is defined only under Article 6. Now it clearly states on all citizens . In uniform or without one. Now you may say that there is a PPO (Pakistan Protection Ordinance) in place now a days authorizing such actions. But again unless there is a Martial Law in the country and the constitution suspended. Don’t tell me not to ask for my rights? I am no traitor if I do.

Fifth and the last point . I would humbly request our dear Armed forces that not to become tools for the Political will of the corrupt leaders that rule the nation today. Attended a session in the consulate today here in Dubai where the Army takeover of 1999 was mocked by one government representative and speeches of Nawaz Sharif has mocked the martyrdom of your many jawans in Kargil – calling it a mistake and a failure & Mr. Zardari’s recent threatening speech. Don’t let the strong respect get washed down by the political ambitions of the rulers to keep you embroiled with MQM and its leadership under guise of questioning their loyalty every few years ; whilst vide backdoor be their allies when needing their votes. Needless to remind you under Article 244 ; your Oath under Schedule 3 of the constitution that you swear to uphold the constitution (which includes Art 4) and that you will not become part of any political activity.

The threat of ISIS grows ; as it has marred the whole neighborhood. India is running away as a global financial and military power. Ask the question of your self that what agenda a UK based journalist would have in Pakistan and especially in Karachi. I read somewhere long time ago that when the Britishers left the region. They left it to come back for Karachi. Hope , you are not falling in this trap ; Nawaz and Zardari don’t care as they have benefitted by investing billions abroad. The 200 million poor Pakistanis would suffer if God forbidden the nation is to see another 1971 .

I as a Pakistani expect you to come out as Armed Forces of Pakistan and defend my rights , give my rights and than expect us to become your arms in your struggle to defend Pakistan. I have not lost faith in you all as yet. Pakistan Zindabad!