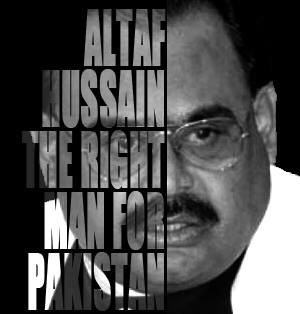 I remember our car being ordered to be stopped on one the side of the road riding with my family. I was roughly about 10 years old. We were returning from a MQM rally. There was a curfew imposed in the city after recent conflict between two communities in Karachi. My dad asked us to hide MQM’s flag as an Army Sentry was checking all the cars before letting them back in the area/locality. My mother looked worried as tried to shove the flag in the cavity under the dashboard. She always use to tell my Dad that being a government servant; he must be careful. But my Dad who was sick and tired of facing the prejudices he was facing due to his ethnic background. Especially after rescuing us from a market attack from another ethnic community . He being even a government servant knew that he may never get the same justice or honor as he was not the son of a soil stood up when Quaid e Tehreek (Leader of the Movement) Altaf Hussain started mobilizing Mohajirs around him across the country.

I remember growing up in a city under siege. Where it was no more a matter that who lives here but who died today. When everyday there was sniper firing. When there were extra judicial killings. When no day went by when surviving was a matter of luck. Yes! as some say that the law and order of the city is bad today. But trust me it was worst when collateral damage was always high but none was arrested killing the innocent civilians but only use to hear unilateral news against MQM by the severely controlled media which even got banned to publish at one point in time & the law enforcement agencies where names like SHO Bhahdur Ali, SHO Zeeshan Kazmi etc etc were famous due to the severe torture techniques they used to impart on the arrested workers of MQM. Words like Cheera and Drill were spread to make you fear and stop from sensing your voice. I am 20 years older. I am yet to see any culprits brought forward or justice provided.

Looking like a specific ethnicity was a privilege pass which means that you must expect a special treatment from the LeA’s. Be it your College where separate body searches use to happen everyday for belonging to APMSO to enter the college. Being stopped on Motor Cycle for looking like a Mohajir by non local police. Being mocked for your ethnicity, daily threats that you would be fitted and fixed if not fall in line. Even some teachers coming from outside Karachi due to their special background would use these lines sometimes as a joke or a threat to ensure that you kept in line and let their inability to not get exposed.

The sense of being Mohajir was slowly becoming a pride from being a pain when and as you realized it more. One day, I remember asking my Dad. Why is it so? Why my mother is always afraid for letting us out ? Why we are always under threat? Remembering the firing in Class 3 from across the wall touching what is known as Qasba Colony . Remembering the stones coming into our class as our teachers scramble us for safety. The question “Why?”was always asked of my Dad. His answer has always been that since we are not sons of the soil . We can never expect equal treatment . So learn to live with it and stand with your people. I chose to stand against it . I joined APMSO the first chance I got.

The more they tried to kill my spirits. Let it be in my work place. Let it be on the street . Let it be amongst friends or let it be where I study. My spirit grew stronger. I remember one such election I participated in IBA ( as an independent though you sign an agreement that you would not engage in any political activities) . I went on with my credentials to stand for it . But was voted with a least margin when sorry to say that a certain mindset and background united to vote me out for belonging to APMSO before IBA ( I lost by One vote though) . But I can still remember the campaign against me. Did it break my resolve? No! it pinched me though for a while. But I promised to come back and stay strong what ever may happen.

Years later . I find us the “Mohajirs” in the same situation. Same arguments that we are Terrorists that we are Anti Pakistan and that we are RAW agents. Same argument about QeT Altaf Hussain . Same modus operandi of confessional statements, conspiracies, planning of factions to bring them from back door in Karachi. Same story continues. They some time win to play with some people’s mind. But I am sure if you look at it honestly you would realize the prejudice, the hate , the bias and the double standards from media, from LeA’s , from political parties and from those who want to nail the Mohajir in the ground.

They ask us that why we call us as “Mohajirs”. Let me ask you that why we still need to be called as “Mohajirs”. Recent statement by Kh Asif the Defence Minister about Mohajirs on the floor of National Assembly is a shame and stark realization of our elders as some of them are maybe in remorse for what happened in the history. Say in 1947.

Some people do not learn. But how can they . Since the country is controlled by those feudals who were with the Unionist Party at the time before partition and against Muslim League. Those who served Muslim League of Quaid e Azam and left everything for him ended up being slaves to the Unionists of Punjab today. Sad but true.

The double standards continue that when QeT Altaf Hussain asks valid questions of the state institutions out of frustration. Immediate resolutions are passed. The ISPR spokesperson issues statement. Bans are implied. Accusations of being RAW agents surface etc etc. But when a son of the soil in form of Kh Asif abuse Army on the floor of the house or Imran Khan reminds about the courage of the Generals or Zardari bullocks them in his speech or Talibans play football with the heads of the soldiers or JI chief cites that the killed soldiers fighting Talibans are not martyrs or Maulana Ghazi fights off SSG Commandos or letters are sent to Congress to block Pakistan’s aid (by Benazir Bhutto) . They are stated and consoled or justified as venting their frustration & upset brothers etc etc. This is the exact reason that makes what QeT Altaf Hussain have been saying becomes reinforced and truthful and reinforces my belief and thoughts and millions along with me.

If I am wrong I would humbly request our “Mohajir” community to please visit your local garrison, your local police station or government offices to realize your true value and essence of what I am trying to portray in this write up. Please experience with all due respect to understand of what I am trying to emphasize here. Also visit the growing graveyards who died fighting or asking for their rights under the constitution of Pakistan which their ancestors built.

So we were a minority in government positions and LeA’s before MQM. MQM has been crushed for so long and traumatized . My fellow Mohajirs you are still a minority; infact a bigger Minority . So wake up.

These LeA’s have been in Karachi for 32 out of last 37 years. 31 of the 37 years (leaving 91-92 & 2003-06 where MQM was allowed to perform without threats) . They have just become part of the same rigmarole to keep authoritarian rule in Karachi. They say MQM has ruled Karachi. Read the tenures I have given and ask of yourselves that whether MQM was in power outside these and than when they were. Didn’t they deliver or not? If honestly asked this question and answered . My argument would hold true.

Some would say that Gen Musharraf built Karachi. With all due respect . He realized that if he gives room to MQM to work and perform . His own rule would be augmented to grow Pakistan and consolidate nevertheless. It did happen as such. I always wondered that if Army and per recent statements of Gen Musharraf who has associated MQM to RAW and terrorism (which has pained me) . I would like to ask him especially belonging to the community that why did you chose to ally with MQM in these years. Was it your ignorance, was it your hypocrisy or was it forced upon you. I am sure you would address it in your next interview to support the Rangers unilateral operation in Karachi.

Let it be Dr Qadeer Khan or former COAS Gen Aslam Beg who when entering their 80’s have been heard chiding their being Mohajir for the misgivings and their treatment is a great testament that these two chose not to call themselves Mohajirs and remained part of the system. Only to realize decades later that being non of the soil was their Achilles heel in the system developed by the Unionists of Punjab who took over Pakistan who I actually call as Establishment.

The question Gen Musharraf also must ask of himself that why no persecution of General Kiyani and why the cases against him still hold (why not abolished till now?) . He himself in his book “Pakistan First” referred that his being Mohajir was a criteria in Mian Sharif’s mind to make him the COAS.

Anyways my arguments may go much longer. But I would leave this now for the readers to think and ask of yourself. That in the bigger picture. Are you being treated equally or not? If your answer is yes than I am wrong. If your answer is no or as such “No Answer” than I am right.
Sadly if the merit would have remained kicked in . This frustration would not have been there and we would have been allowed to serve Pakistan better . But what to do I guess. I am worried for what comes next . But till that time. Pakistan Zindabad!