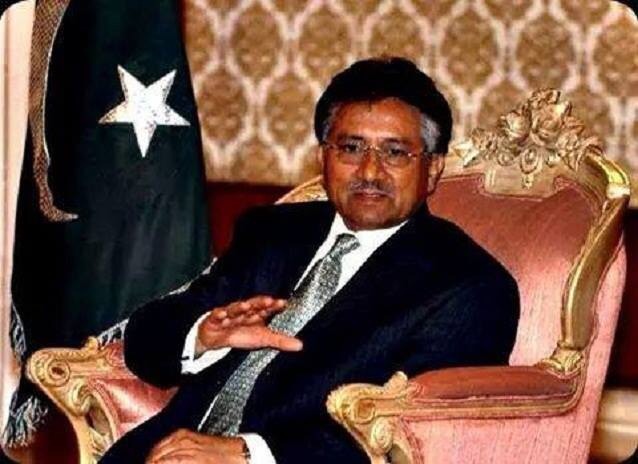 “Any one but PMLN and PPP has the right to rule Pakistan. PMLN has failed many a times and PPP is a party which is failing” said former President of Pakistan Gen Pervez Musharraf in his first interview with Moeed Prizada and Fawad Chaudhary on ARY News Channel in his first domestic interview after the treason case against him opened as has been predicted in the past where since he acted on the advise of his government are all being brought under the perview of the investigation.

General Pervez Musharraf has been seen on the front foot which is a good sign for Pakistan as we also saw him on BBC hard talk where he defended his decisions as the President of the country since they were done only and only in the interest of the country. Interestingly, he has been seen taking an aggressive view on India especially as now Narendara Modi is in power who is a powerful personality. Gen Pervez Musharraf being a strong personality himself who is looking like to match pound by pound in terms of political statesmanship when it comes to Modi on the other side of the border as our current political leadership in power or in the opposition look subdued due to many reasons.

On the issue of on rapprochement towards both PPP and PMLN in his later part of the tenure. Gen Pervez Musharraf stated yet again that whilst US would have liked to see a joint form of a government with both Gen Musharraf and Benazir in power . Our middle eastern friends wanted to give Nawaz Sharif an equal chance to come back to Pakistan to play his role. We all know why or I leave that to your imagination? But Gen Musharraf’s choice to leave Pakistan after PPP came into power was keeping in view that he did not want to become a powerless President. Only to return at the time when he saw the need. But though forces tried to ensure that he fails to create a third force. They have a new third force in the form of PTI in their face challenging the writ of the government and growing. The only fear that General Pervez Musharraf showed was that if Imran Khan persists with his solo flight syndrome; Imran would crash yet again. As per him that in 2002 Imran felt that he would get 90 odd seats and yet managed to get one though clear ground was provided by reducing the age of the voters as he chose to insist with his solo flight. The same could happen to his Tsunami this time if he chooses to continue with same logic. General Pervez Musharraf vocally said that with the noise on the ground to overthrow PMLN government. Had there been a 58 2 (b) or National Security Council. The change would have come by now and in my view why not that should happen in the first place?

What has the poor gotten out of bringing first PPP and than PMLN in power in the name of democracy? Thousands have died due to terrorism if not due to hunger or law and order. Pakistanis continue to die today. From Thar to Thal. The two parties who now are in power in their provincial strong holds each since 2008 have failed to alleviate the masses.

PPP which was formed on the premise of Food and Shelter has ensured every bit to take it away from the people. The example of Thar is a great proof. The lack of development in interior Sind is nothing short of the proof of the incapability of the PPP government.

So what has changed since General Pervez Musharraf has been edged out of power? Has the Baluchistan issue been resolved? It holds in fact its clear that irrespective the Baloch separatists want their intention of breaking Pakistan served. President Musharraf highlighted that they were trying to alleviate the situation over there in Baluchistan by creating educational and infrastructure opportunities to the dislikes of maybe some of their Sardars and in my view immaterial to the separatists . The lack of the writ of the government in Baluchistan at the hands of PPP has worsened the issue in Baluchistan only. Other issues pertaining to Talibanisation has worsened many folds. The economy has collapsed. I sometimes wonder as a Pakistani what have we achieved from the gift of the democracy bestowed upon us when only PPP or PMLN were to come back to power.

Looks like that by the day it becomes clearer that many a forces who wanted to see a more flexible government in Pakistan which would have allowed them to execute their game plan in this region with free hand without check since especially PPP government would have been on the back foot due to the many skeletons in the closet. They may have achieved the same as we saw the turmoil over the last few years since Musharraf government ceased to exist. Now we see PMLN playing the role. Reason of their survival till date.

We as a nation are failing to project our cause with conviction. Reason why we are loosing ground especially in Afghanistan where India is coercing there to create a pro India Afghanistan” said Gen Pervez Musharraf highlighting the need that we need a stronger policy on Afghanistan. Maybe this is the type of steadfast position that he was edged out. One famous media house that is GEO which practically spearheaded movement against him has now being proven to have links with anti Pakistan forces due to their recent overtures against our Army and ISI either in the name of Baluchistan issue which again is a proxy front of our neighbor or otherwise. The sudden movement. The flow of money. The judicial activation (which died down after President Musharraf left) and the hyper media activity adds up to who had to gain. Same forces who were to recover Osama from Pakistan and as well get Pakistan embroiled in a deeper conflict in Afghanistan. Whilst such forces ensured that rulers became rich but at the same time also ensured that Pakistan as a nation becomes weak both financially and politically. Unfortunately, they succeeded . If the above is wrong than why a corrupt President Asif Zardari was bestowed on us as Pakistanis.

I was practically hysterical to see that Asif Zardari is unable to ask or order his otherwise subservient government to form a university in Hyderabad. After recent noise from MQM’s leader Altaf Hussein had to ask for a university . A pro PPP governor of MQM i.e. Dr. Ishrat ul Ibad had to ask a realtor Malik Riaz to finance this university with Asif Zaradri’s consent. Could not still digest what everyone has to gain financially as there is no free lunch in this world ? Whilst I hope that the university is delivered. But at what cost?

President Musharraf is of the view that Pakistan do not need a Western form of democracy. He further asserted that to create checks and balances . Pakistan Army has a role. Reason why National security council is key. The right question he has raised that why democratic governments has not been able to improve socio economic indicators whilst all Army governments did. He further advised that a Presidential form of government is needed in Pakistan as it is in United States,

He was very vocal that he did not succumb to any pressure when he allowed Benazir to return as NRO was finalized since these cases were formed before him . The only issue is that in 2002 since PMLQ could not win a simple majority they had to create coalition reason why much went astray after the first three years of his government. This brings the point that had he got any intentions to have absolute power. Rigging could have been done to achieve the same which did not happen showing his sincerity.

So to conclude former President General Pervez Musharraf is an honest and a sincere man who picked a fight with Nawaz on Kargil issue nothing for his personal gain. He let Nawaz and Shahbaz brothers go abroad under a deal trusting them. He entered a deal with Benazir that she would only come back after 2008 elections which she violated. He let Nawaz come back trusting him that he would behave himself only to see a long march against him. He challenged Chaudhary Iftikhar on ethical issues not because of any personal grudge (we have seen in the last two years the truth).. He left Pakistan in financial woes that he had to live with a friend for a few days. Only to see some dollars due to his lecture circuit. Knowing of all the challenges returned to Pakistan expecting political maturity only to be embroiled in a treason case wrongfully which time has shown has no relevance. Many years on has no case of corruption against him and is living a simple life unlike all our politicians who are in power or outside.

He said it right that without reforms . We would get the same lot elected. There is no point pursuing this course. We need across the board reforms with adequate checks and balance to ensure a stable future for Pakistan with a balanced role for Pakistan Army who is a guarantor of our peace and sovereignty . His view are accurate to get Pakistan a stable government. In my view if there is an interim set up to bring these reforms . He is the best man for the job . He has come a long way of knowing the trick of the trade our politicians have . He has seen from outside what went right and what went wrong and what is required to address? I am sure that with his track record. He could bring stability to both domestic and foreign policies we face as Pakistanis. Again , I just hope that this happens at the earliest before we run out of time. Pakistan Zindabad!