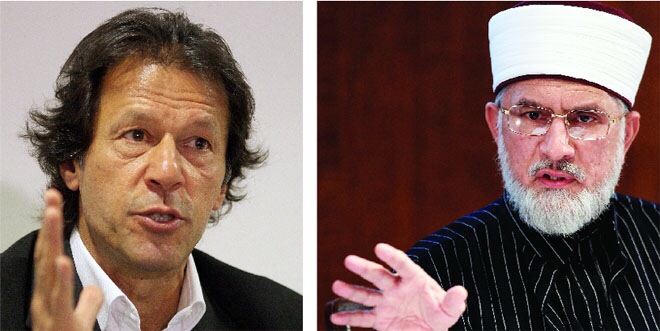 It is that time of the year when the work is at the full swing. But the ongoing protests in the country keeps you distracted. Nevertheless had a tough deadline to meet yesterday when my colleague from India asked me to catch up for a coffee downstairs. Could not resist as I badly needed the break from the routine as well as wanted to check over the internet what’s happening in the capital Islamabad.

Now let me assure you that whilst I fully support change of the current status quo of the system as it provides in equal chance for every one and has imposed the rule of 98% on the nation. This I have highlighted in my past writings. But what I didn’t want that someone using extra constitutional means to come to power. As I write this in my view there are two protests going on. One for personal glory though its been given an impression that its in our interest to make Imran Khan the Prime Minister of Pakistan (aka Azaadi March). The second one called Inquilaab March led by Dr Tahir ul Qadri calls for reforms across the board not restricted to just pertaining to electoral process. If I have to choose I would support the change which gets us an across the board change. Not just to bring someone in power.

Anyways, as got our coffee freshly brewed. My Indian colleague who has a deep penchant for politics asks me the question. I knew it was coming for a few days. Maybe he thought that its just another turmoil which will go away in a few days but than this time round its been almost a week. “So what’s going on? Is it going to go away? Is Nawaz Sharif going to survive? . As I sipped my favorite Mint Condition coffee . I looked at him though I wouldn’t want him to survive. But looks like he may survive but as a weak Prime Minister going forward. “Why would you want that?” he asked looking intrigued knowing that in a Nuclear Powered Nation ; a weak Prime Minister is no good news for India especially some one who is warming up to India. “ Well simple . With 15 million votes and more than a simple majority. With his Brother and half his family in power. I would not like him to be a very powerful Prime Minister as the last time pre Oct 99 ; he almost became an absolute commander. So that’s why I would like him to be a weak one”.

“Do you want my opinion on what’s going in your country?” asked my colleague who would I call as just “V” going forward. I sheepishly said “Go ahead!” since myself like many other Pakistanis could not add up as to what is developing thought that may be an outsider view would help. What transpired in the next few minutes of our discussion was interesting? Infact very very interesting .

“ Simple he said. First of all I must say that where do you (as Pakistanis) want to fight the battle within or outside? Fighting from outside would not help. Fighting from within would” said V . Than he asked me a pertinent question “How many of those participating in these rallies actually voted ?” I said “I am sure many did”. The guy (Imran Khan) got roughly 8 million votes . “So in a country of 200 million with approx 100 million or so eligible voters 8 million voted for him . That is roughly 8% . How many over all votes got casted ?” . “ Well may be 30 Million or so . Again I was not that sure” I said to him thinking I doubted that 50% of these votes could have been bogus. “So if the rest of the voters came out for this guy (Imran). He could have over come all others” he asserted. “Well I guess. But if in the first place . All of them ever come out and also if they would choose to vote for him and now especially after seeing immature antics in politics where he is now known as a Master of U Turn and is just a solo player” I replied. “ But what are you trying to arrive at Mr.?” I asked him looking at him lost in his thoughts . “ I was just thinking that elections in Pakistan happened last year . Why did he raised the issue now? Why did he not go to the courts? See when it happened in Mumbai, they went to the court and got their votes counted”. “Well my friend he went to them but did not get his choice of justice. Also now he trusts no one. So I doubt there is anyway to comfort him as I think and as per his close aides who have now distanced themselves. He dreams, walks and talks thinking that it his God given right now to become the Prime Minister”. Though I wondered why he did not take out all these protests in the time of PPP which was certified corrupt with maybe the most corrupt man in the country as its President.

“ Whatever the case Danish . It’s a democratically elected government. Your people should find a way within to resolve this amicably without democracy being derailed. It is destroying the image of Pakistan and we fear that another extra constitutional step could be in the making. We need a stable Pakistan to talk peace. The way things are . I don’t think our government would ever step into any discussions knowing that there is no continuity” he said as we walked back to our office. “Why cant your Prime Minister call for a joint session of the parliament and present the bill for electoral reforms inclusive of constituting an autonomous election commission comprised of people of impeccable character without blemish with full authority?” he suggested. “Well my friend if you see this is what Imran is honestly asking but again instead of presenting such a bill in the parliament though being an elected members has instead chosen to protest in front of it as he does not like defeat and knowing his numbers know the fate of which. Well its simple he needs to understand more of how to handle the house.”

“ By the way you could recommend Right to recall in the electoral reforms bill?” he further suggested . “Now what is this ?” I asked inquisitively . “See its simple if the elected candidate or candidates do not perform. People should have a right to vote the candidate out of power without necessarily waiting for the expiry of the term” he said in a single breath. “Hmmm a good suggestion. Looks like the coffee is working . But I don’t think we are a matured democracy . Since we are naïve to believe that 50000 people can topple an elected government . Imagine if we have this than we would be having recalls every few months” I chuckled thinking about it. But if you think of it . The idea is not so bad as well. If taken in true spirit and implemented properly governed by an autonomous Election Commission which I would feel is a far off dream.

“ Did he really asked people to do Civil Disobedience? What type of a leader who wants to become the Prime Minister would suggest that? My friend its easy to ask to break the law than asking to follow it. Why he could not have insisted on ensuring that instead they stop paying taxes. Should ensure that instead everyone around them do pay taxes and highlight those who don’t ?”, “Well see simple most of his supporters children come from the family who have looted and plundered the country . As you see he won the seats of Islamabad and Defence / Clifton in Karachi inhabited by a lot of people who have built their empires on corruption and may be tax default. How can he arouse something against them?” . “Further he has this knack of making populists demands and he knows that asking people not to pay bills and taxes is an easier and a popular way of getting his suggestions implemented instead of the other way around” I said as we entered back into the corridors of the corporate world.

“By the way . I think he is just keeping pressure on the government and the army to withdraw from the operation against the Taliban as he needs to rule his province of KPK in my view” he commented before he head back to his seat. “Now that is a possibility I cannot agree less” I smiled as went back to finish my work.

That day in the evening as I switched through channels. The discussion came to my head. But whilst I think Dr. Tahir ul Qadri has conducted his case in a very matured manner . I think Imran Khan has made a mockery out of a solemn institution from which he is yet to resign. But also a mockery of the people who came out to protest for him. No wonder the numbers plummet every day. I wonder if there are no concerts in his rallies. Would anyone attend to listen to his cribbing and bickering without solutions.

Anyways I just wish that soon the chaos in the country ends. We bring normalcy to our nation . We achieve the change through democratic and constitutional means instead of introducing below the belt politics. At the same time the sitting government would have to at least listen to those who are sincere to bring change. I think there are many demands which are very justified in addition to electoral reforms inclusive of financial , educational , health and social/civil reforms. I just want that we are given a chance as a nation to deliver to our capability and potential instead of being abused in the name of democracy and principals every now and then especially by leaders who don’t know what they are doing. I remember Imran Khan giving the same speeches to get Chaudhary Iftikhar reinstated and to oust former President General Pervez Musharraf not so long ago. See where did he got us showing that he lacks vision and understanding of politics. Why should I or for that any one’s sake should believe him now? What if he takes another U-turn in a few years and realized that his path was wrong as he realizes today on the issue of Chaudhary Iftikhar years later.

I wish that our masses get their due rights. I wish our rulers give them those. I wish we do it without dividing the country. I wish we have a nation giving equal opportunity to all and I wish that it happens in my life time. Pakistan Zindabad!