The last few weeks of Pakistani politics have been very aggressive. I feel that the nation is getting more and more polarized. The tempers flying high. The sense of deprivation is rife. All smaller provinces are seeing insurgencies in their own style. Lets not forget the peace walk for Baluchistan is still on.

In the last few days QET Altaf Hussein made two resounding statements whilst the rest were chickening around it. The first one was coming out strong in the support of Pervez Musharraf and second speaking out of frustration on the need to create a separate province out of the grasp of feudals of Sind . Two lengthy topics but would touch upon both.

I have personally written a lot recently supporting Pervez Musharraf. What I was disappointed to see that many political parties and politicians who were hand and glove with him were seen quiet on the issue of Pervez Musharraf on being declared a traitor. I saw the General fighting a solo war. A few days ago I wrote that I specifically checked his body language during a TV interview and showed concerns for him being seemingly looking disgruntled that no one came out for him when he required the most. Being a commando I suppose he wanted to fight this one out on his own as well. Without realizing that politics is a different ball game.

But finally QET Altaf Hussein spoke and came out strong in defence of Pervez Musharraf. Out came the support from the thousands of MQM supporters on social media bringing in much needed re-enforcements for the General. Boasting his team of supporters. Like always MQM and Altaf Hussein received a lot of ire at the hands of media but I don’t think that he cares much now becoming a seasoned politician. He was right to point out that why only Pervez Musharraf is being targeted though many bathed in glory when he was in power. Like I also raised this point a few blogs ago that is it because the General is not the son of a soil that he is at the receiving end? Even Asif Zardari the Champion of the Corrupt and his cartoon son had the audacity of calling out Pervez Musharraf and our Army disgracefully. I was amazed to see that some in our media renouncing and supporting Zardari over Musharraf. Come on people get a life and be real for this nation. The two are worlds apart. Pervez Musharraf was and would always be an asset for Pakistan and Zardari and his goons would always be a Liability for us.

Altaf Hussein raised some valid points on the intent of the case, the bench and mainly that why we do not try him for the Oct 12th 1999’s retaliatory step. Why November 3rd only? Suddenly the whole media pounced all over Altaf Hussein on speaking like a truthful politician and not like a hypocrite . Someone like Imran Khan who talk about patriotism and support Talibans deep inside. Like Zradari who talk about Pakistan and yet have looted it to its core or like Nawaz Sharif who though talk about principles but have forgotten his arrangements before he was expelled to Saudi Arabia. Altaf Hussein spoke out and then we saw Ch Shujaat Hussein, Pervaiz Ellahi and some other generals and philosophers coming out in support. The best has been Hasan Nisar like always. Always speaking like a true patriot. I am happy to see Pervez Musharraf and his team fight back. Though the General has fallen sick. I would advise a retreat is not always a defeat because it could also be a strategic retreat as the war is still on and would go on till his type are not in power in Pakistan to selflessly grow it.

Riding on the same spirit Altaf Hussein brought another rude fact back to life which was again taken out of context though the demand being in line with the constitution of Pakistan and again labeled as a traitor. This time getting frustrated that the feudal rural Sind has made no effort to appease the Urban Sind in the last 5 years or so or even since 1971; where the inhabitants of the Urban suffer significantly at the hands of slow pace of development, at hands of ethnic strife , at the hands of Lyari Gangwar who are in bed with PPP and infact being their henchmen or TTP which though is challenged by Bilawal Bhutto in speeches but looks like PPP is in bed with them as no concrete operation is happening against them. Based on the same assumption . Altaf Hussein asked for the rights of the people under the Fundamental Rights given in the constitution of Pakistan to have a separate administrative province out of the grasp of the feudals and non- committal and corrupt politicians and infact dakus of PPP. I have done blogs extensively in the past on these topics. Altaf Hussein raised and voiced the same concerns as I have . I being a resident of the city who understand a bit on the capability of PPP and its officers who run Karachi and Hyderabad as a colony fully endorse his demand of a separate administrative province in line with the constitution of the country since the current set up has failed them in those rights.

But yet again it looks like the media and pundits who were already upset with Altaf Hussein on supporting Pervez Musharraf got further upset without realizing that they themselves in the past have asked for Southern Punjab and Hazara Provinces . Started labeling Altaf Hussein as a traitor for highlighting that by not doing so it would not be in the interest of the country . As pushing people to the wall for their rights has given us a nation bitter lessons in the past in form of Bangladesh and currently the ongoing strife in Baluchistan since independence in 1947.

People might say that QET Altaf Hussein and MQM supported PPP in the past. I agree that after a certain point and especially Katti Pahadi incident. MQM should have backed off from supporting PPP government. But then again we may never know the political ground realities of Sind . Reason why now MQM has reached out to even its strongest critic but a middle class Sindhi politician Ayaz Latif Palijo which in my view is a good move.

So if we think calling everyone who challenges the status quo. The overwhelming dominion of Punjab on the rest of the country , challenging the feudal system, challenging the writ of a few on the political sphere of the country makes you a traitor like Pervez Musharraf and Altaf Hussein than be with it. I have the same thoughts as well and I support their thoughts as a Pakistani.

Ch Shujaat rightfully said that Pakistan comes first . As if there is Pakistan than the constitution is there and has a value . We should all think that as an evolving nation that do we need any corrective measures to strengthen the nation than be with it and amend the constitution . But please do not use it to enslave and confuse the country for your own political ambitions. I want to say this strongly to PMLN, PPP, PTI and their likes who play both sides. The cost is immense; thousands of civilians have died already, thousands of our army men have been martyred due to your hegemony and many thousands have already died in Karachi and the counter is ticking. So instead of wasting time on labeling its sons as traitors for not being sons of the soil. Focus on accepting their sincere input and build the nation instead for our posterity. Pakistan Zindabad! 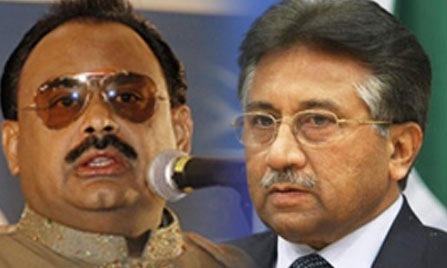