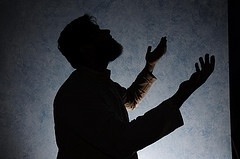 The word of God echoed in the air. The wind slightly brushing against my forehead. The sea breeze was pleasant . The night was the biggest night of the Islamic Calendar. I just landed a few hours ago in my beloved city of Karachi to celebrate Eid when my childhood friend called me to come with him to offer prayers. Suddenly I find myself standing for the special prayer for a special night. All went well till the time we raised our hands to pray. To my dismay; although the prayer sought was generous and detailed. It failed to mention one key thing i.e. Pakistan.

After the prayer was over I stood up to the prayer leader and challenged him for not mentioning Pakistan in the prayer though he chose to mention Afghanistan, Iraq, Syria and Palestine. He said he prayed for over all peace. I shamed him for not praying for our Pakistan though we stood on the grounds of the same motherland. I removed myself from further prayers under the lead. Agitated I told my hosts that for me it’s unacceptable. But sadly for others around me it was a non-issue. Maybe just landing in Pakistan my testosterone for my country was high.

I doubt that the prayer leader understood what he was relating to since it was an Arabic though I can understand a bit of it myself having lived in Middle East for a few years. Consoled myself that this could have been a localized issue when discovered to my horror that it was not that when praying in a Government owned mosque for Eid prayers in the area of Bath Island. The prayer leader or Imam again followed the same line and did not usher a single word for our Pakistan or for the soldiers who are fighting for this nation. Not a single word. Again I chose to get up before the Duaa was over . Don’t think it matters much but it was my little protest.

I hope that others stand up to such Prayer leaders and throw them out of their mosques if they choose not to respect our country. Our motherland Pakistan and do not respect the Army Jawans being martyred fighting the anti-state Taliban’s. Anyways, I am sure that the spirit would arise.

At the same time there is another concern raising head in the country when the IDP’s move across the country. The fear is that our security agencies keep a check on the Taliban’s moving into the main cities under the guise of civilians like they did during Swat operation unchecked. I am sure our security agencies would know to keep an eye on the same as they would not like the Taliban menace to spread across the nation and especially Karachi. I fear with the above rehotric in the air they would get some solace and support in the main cities and especially Karachi. We have seen that in the last many years when we hear stories where Taliban kind of jirgas are in effect in the city. ANP a leading Pashtun party is a victim where they themselves have been thrown out of their various offices across the city. The dangerous point as highlighted many a times before is that the Taliban colonies are being developed at all strategic locations in the country. One example is next to the Oil storage facilities in the city like Shireen Jinnah Colony or Kemari Area. Others being the main entry point in the city of Karachi at Sohrab Goth. Now what I am stating here is not news but is a fact and has been known to many agencies but I wonder why there is no concurrent operation in process for the last many years though I am seeing some targeted operations happening but I wonder if these are enough .
Unfortunately, some of our political leadership that is the far left under guise of PTI and far right under guise of PMLN are both inclined towards these Taliban’s. I am very thankful to our brave Pakistan Army who have taken steps to take the Taliban menace by the horn and that too especially in the Northern Waziristan but like I have stated many times earlier that it should not stop there. I am sure that some may have leaked into other parts of the country and especially Karachi and leaving them untouched would be futile.

Like every year we saw due to the same thought process a parallel decision making process when it came to moon sighting this year and yet again we celebrated two Eids in the country. Ironically, PTI’s chief Imran Khan decided to celebrate Eid with the same thought in KPK. Now we have been saying it for many years now that he represents politically the same thought or is rebranding of JI . His actions though claiming to be a national leader is significant of the fact that either he has been overwhelmed by the Taliban thought or he is part of the problem. Now if it is the former than doesn’t he have trust in the efforts of the Pakistan Army who are reddening the mud of the nation with their blood? Ironic if he doesn’t have that trust . Wonder who can he trust to deliver in this nation if it’s not our Army?

Now, we approach a turning point in the future of this nation that if we take one wrong step in the process of the operation against Taliban as politicians or civilians than we can end up being into clutches of the tryst of the Talibanization as like in the case of Iraq or Syria ? We have seen that in the case of these two countries their armies collapsed and such forces has taken over. We can’t allow the same in or case. We would need to rise and agree as a nation that any step against the operation against Taliban’s should be seen as an anti-state step and against the sovereignty of the nation guaranteed to us as per the constitution of the country and if any party or group decides to derail the same should be treated as nothing short of being traitors. Unfortunate to see parties like PTI who claim to be national parties are yet to say a single word in favor of the operation or in support of our young soldiers and officers being martyred. Instead they focus on their own political vendettas. Anyways we would cover this in another piece.

At this stage; we need to unite against the emerging thought where Pakistan is secondary to everything else unfortunately as I belief that if Pakistan is there the rest is there . If we see such incidents as I witnessed happening around us. We need to stand up against which and challenge the same. Otherwise, we would end up making our nation a polarized and a talibanized nation which is against the vision of our founders like Quaid e Azam Muhammad Ali Jinnah and even our constitution. I hope, we would all stand up to challenge the same as one soul can’t do it alone. Pakistan Zindabad!