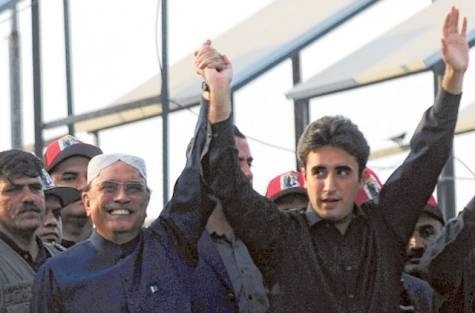 I have started to hate the conniving statements of the former President of Pakistan or let me say Mr. 10% in his backyard of Ghadi Khuda Buksh and that too in the shade of the Bhutto family. One of whom he has been accused killing of. Only God knows about the second one.

Heard the news earlier today that Bilawal Bhutto Zardari ; which is a confused and a hypocritical pseudo or mutated name for me anyways just re-enforces the title of this blog that for getting into power the brains within PPP can go to any extents. Why do you think that PPP after all these years need the brand Bhutto to support its dying legacy? Because if you see all they have achieved; is a hanged Founder and a murdered Leader. Anyways, continuing from where we left in Part I.

PPP go into 1993 with its second term and thanks to establishment’s fall out with Nawaz Sharif . Now yet again; they come into power on the shoulders of the same establishment which they abuse and accuse. Now in this tenure. Mr. 10% becomes more careful when going after his quest for ill gotten wealth and this time go after the Environmental Ministry. Now how can one think that there can be any corruption under this portfolio. Believe me all. He did it there as well. Well the folk lore goes as one example of many that a very famous group was setting up a chemical plant somewhere in Punjab and one fine day they receive a notice from Environment Ministry for a big fine in millions of rupees. The owners started moving sky as they were nearing completion of their project and through some contacts manage to reach the Minister. Only to be told that they would need to donate millions in the party fund in Islamabad. Well the duo obliged only to find to their horror ; a second notice and this time when they highlighted that they just paid. They were reminded that the monies paid was for the party but this time it if for the man himself.

Now lets not forget for some odd reason and interestingly. The same Talibans which is being despised by PPP all over the world start getting their act together under Benazir Bhutto and some say that Naseer ullah Babar had a good hand to play in it. Again, why a party which is against fundamentalism and is at logger heads with establishment would do so? Now I am sure that we all remember the operation in Karachi. The viciousness of which has left never healing scars there. So as it deserved PPP government was over thrown again. Only to find Benazir Bhutto crying foul. Ignoring that her spouse is the Brutus. Now that may be necessarily or not necessarily be with or without her knowledge. But what was the final blow to her government in my view was the murder of her brother and the true heir of PPP i.e. Murtaza Bhutto and again that by yours truly Mr. 10% . I am sure with all this chaos . She had no reason to keep continuing in the slot of the Prime Minister. Now lets not forget that it was PPP which at the same time deprived and started operations again like in 70’s against the Baluch Sardars instead of patching them up. The legacy continue and those closer to Islamabad would know. The heated exchanges between Bugti and Benazir Bhutto at that time. What confuses me is that PPP tow the establishment line and yet I am sure due to its naivety or by fate is thrown out of its power time and again.

Lets fast forward it to 2007. Now I don’t say that politics is not a game. That is why you use acronym “Playing Politics”. But PPP which claims to be the torch bearer for the Ghareeb Awam should walk the walk at the same time. A feudal party from the core and is continuing to be one when the new lord Bilawal Zardari and I would not call him Bilawal Bhutto whose only qualification is British Education and being Benazir’s son is getting ready to take over the fate of our next generation or our posterity as well. Can you all allow that? After being enslaved by two generations of Bhuttos . Are we all ready to go for the third one? The question which especially PPP supporters should be asking of themselves is that how many schools, colleges, universities , hospitals or industries PPP has given them in Rural Sind. The only achievement of the former President is his increase in Ethanol empire and setting up which some say a booze factory in the Hub area. What these poor got out of voting like blind after all these years?

Some would say jobs in public sector , police etc . But the income is all mainly through bribes, embezzlement or cheating. The money they spend is as good as stealing. Technically, the only skill set which PPP has bestowed upon its supporters is either slavery or corruption. Later of which is Haram . Now my words would pain a few. But tell me isn’t that the fact. Show me what more they have achieved. The few who have accomplished from PPP areas have done so due to their own efforts and I am sure PPP would not dare take credit for that.

After Benazir Bhutto’s death or murder. Well sorry to say she was again using the future of Pakistan to do what. To get cases against her corrupt husband abolished under NRO. The nation deserved better. Had she negotiated on better terms. Just not get her corrupt lot absolved. The only thing is that the demon she unleashed in 90’s i.e. Taliban became here nemesis and she lost her life to the game she started more than a decade ago. Maybe cold justice for the derailing of the Khalsa Movement and massacre of many Sikhs in Eastern Punjab in India due to her information sharing with India. Now, once she was gone. The nation again was left in a lurch by not getting an autopsy done on her body. Zardari has to say Pakistan Khappay . PPP again pulled a card out of its sleeve. This time threatening the country . Creating chaos and anarchy after her death. Rapes, lootings, pillage etc etc. In the name of ensuring and blackmailing to get into power. Yet another demise gets them there.

This time the dentonic model president who let no moment of not showing his beautiful teeth goes to a new level where for his quest of power ally with PMLN and even go to MQM and Altaf Hussein and pledge support and sincere regrets on the 90’s operation. Only to see that at the opportune moment . Create another monster naming Zulfiqar Mirza. Distributing almost 400k armed licenses in Karachi. Unleashing People’s Aman Committee in Karachi and creating more confusion in Baluchistan. Now I wonder. How come our Army trusts someone who in the past was blaming it for the death for his father in law and recently his wife and indirectly got the sovereignty of Pakistan threatened. Yet, he became the President and conducted the government in such a way that whilst he and his cronies played the game of politics, became richer and richer. The nation kept on becoming poorer and in the name of “Mafahimat” ; PPP got what it wanted a five year term. But the result was loss to Pakistan. Now people and I am sure PPP apologists would say that why didn’t opposition like PMLN or MQM made an effort to pull it down. I think its good that they did not go for any extra constitutional step to oust PPP. One that they avoided Article 6 accusation. And number Two ; such a step would have added to the sorry political life of PPP.

Now today , PPP is playing another game in Karachi. Since they cant deliver due to lack of will and both capacity in the interior Sindh. They want to keep the whole province including other political players and armed forces embroiled in yet another confusing operation so that the poor people of Interior Sind do not ask for their rights to a quality life in the interior. Well I don’t say that they cant come to Karachi. But they should ask the question of themselves that after almost half a dozen provincial governments under PPP rule and at least 4 governments in the center. Why do they still need to? Why Hyderabad or Sukkur is lagging behind? Why Private companies do not hire their kids knowing that cheating is key for their graduation? Knowing that a stamp of corruption has been marked on their foreheads. Not all are bad. But that is the only gift PPP has given them as a legacy after all these years.

They want to continue playing games with their poor people in rural areas. By continue pitching one against another like they did in Karachi where they ensured that Urdu Speaking fights Pathan or Baluch fights Urdu Speaking whilst they keep consolidating power in the center. If they were such a sincere , nationalistic and a patriot party. They should have ensured that this did not happen but yet they fanned it. The consequence is what we face in Karachi today?

Now ask this question of your self . Keep these examples in front of you and many more. Is PPP sincere to Pakistan? Or is it only sincere to its quest of ruling and looting this country? The new quest is that there should be transfer of power to their third generation over next decade or so. As Pakistanis would you allow that. And I mean other parties inclusive. This nepotism and lack of merit . This feudalistic hegemony is why and what we suffer today. Think if this is the Pakistan you would like to leave for our posterity? Think! Time to rise . Especially the poor of Sind and rise against this hegemony. Take your fate in your own hands. Stop PPP from playing games with your lives and future. Pakistan Zindabad! And I am sure this slogan does not hold any meaning for PPP.