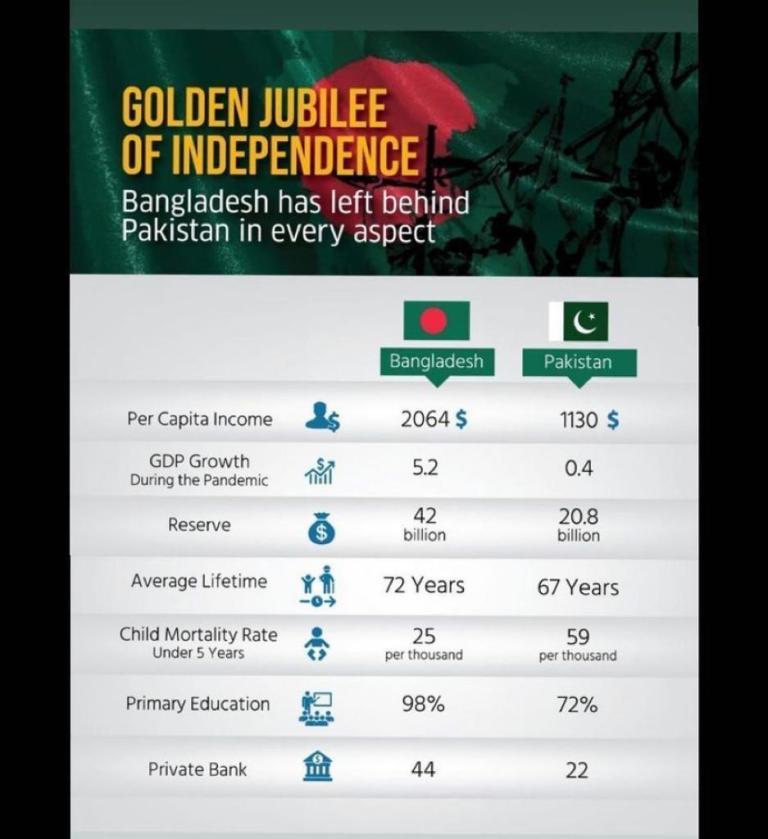 Everyone is quoting a recent data published most probably by Bangladesh government celebrating its success 50 years beyond coming into independence. I can see many politicians or analysts in a subdued voice quoting the same and asking that why is such that Bangladesh which was deemed to be the weaker link before 1971 has left Pakistan behind 50 years on . Let me list down a few reasons for the same .

I will not discuss the tumultuous history which led to the breaking of Pakistan much has been discussed about it as long as I can remember though two points to note is how come a place which was the birthplace of Muslim League in 1906 (Dhaka) with people like Mujeeb became disenchanted with Pakistan . Why didn’t we agree to his (Mujeeb’s) 6 points as I see current 18th Amendment so much loved by PPP being the same. Lets dwell on this some other day.

But since I saw the graphic my mind wanted to explain the reasons having known many Bengalis living in UAE and doing some research on it. But I will keep it simple. So lets find out why Bangladesh has beaten us today and I can say fair and square without any conspiracy theories. We must learn from it otherwise it would be x multiples ahead of us in all fields.

Reason Number One- One Identity : Once Bangladesh (East Pakistan)  separated from (West) Pakistan (some say got rid of us) in 1971. They did not have to grapple with the various ethnic issues like we have today. There is still struggle and we are yet to be Pakistanis. People still call them as Punjabis, Sindhis, Baluchs , Pathans and Muhajirs (please note only Muhajirs are asked why they call themselves as Muhajirs) and than there is Seraiki, Kashmiri etc etc. Whilst once separated from Pakistan they had one identity that is “Only Bengali” whilst we still grapple to become “Only Pakistani”. How would this has been possible when even after dividing the 1973 constitution safeguarded the four major identities and attempted to downgrade other ethnicities.

Reason Number Two- Democracy : In the beginning Bangladesh struggled with Democracy but than once they took the flavor of democracy though it was musical chairs with a brief judicial martial law. A stable democracy with all its negatives has contributed to the nation’s stability and an environment conducive for progress and stability . No interference in democratic process has let the country flourish and trusted by international investors. We have had two Martial Laws since we parted from Bangladesh and perhaps there is a Half Martial Law in force in Pakistan since last many years.

Reason Number Three- Focus on Economy : As you go to most of the malls you would see “Made in Bangladesh” on the tags of the garments and accessories. Before partition, we used to boast that apart from jute East Pakistan has nothing else and that cyclones is the curse which torments it every few years and they are burden for the West. Today, they are one of the leading exporters in the world producing for all the major brands. The nationalism helped them with the need to get ahead from their former partners. They created environments to attract business and manufacturing in their country on fair terms instead of with the intentions of defeating the system to siphoned off taxes or make personal wealth. Ironically, many Pakistani industries set up their factories in Bangladesh seeing the environment. Whilst , we were left behind even in textile industry which was our pride being a cotton producing nation. Today, we are still happy to produce non-value added products.

Reason Number Four – Establishing Micro Economy : Dr. Younus got the ball rolling and helped support the micro economy in Bangladesh . Supporting people on merit . Yes, this was possible in Bangladesh as there was no concern of Quota system or supporting certain ethnicities instead of being on Merit. Major reason why it started a wave of development at ground level and is benefitting from it today seeing better education access and health for downtrodden . This inclusive economy is key for its growth.

Reason Number Five –  Less or No religious strife : Unlike in Pakistan, where sectarian issues have been marring Pakistan which led to various incidents and perhaps leading to the growth to elements like Taliban’s and other religious movements in the country which has been one reason for the nation dictated in terms of its internal policy to placate such elements . Unlike in Bangladesh this issue is less tumultuous for a uniform sectarian majority not letting international elements interfering in their country.

Reason Number Six – Stable Foreign Relations : Bangladesh is lucky that they don’t have neighbors like Afghanistan , Iran and dispute with India especially like that of the Kashmir issue . They do have minor territorial disputes but they cant go to war against the same country which helped them achieve independence. Also, at the same time the country doesn’t aspire to the Leader of the Islamic states but are happy to be simply “Bangladesh”.

I am sure many Pakistanis would not agree with what I have written above and may end up calling me a “Traitor” for speaking the truth. Some may even ask me to go back to “India” due to my “Muhajir” origins. But the fact would remain that we and only ourselves are responsible we face as a nation today. But I am sure we would find an international conspiracy behind this.

I think what Bangladesh has achieved is not impossible. But for that we would have to become One Nation. But please don’t just ask me to stop calling myself a Muhajir but start from within and eliminate the concept of ethnic identity as names of the provinces and perhaps make more of them.

Like it or not. Our neighbors are growing fast. Next to watch out would be Afghanistan. Even Iran , has survived with all the sanctions. But we struggle each day. So calling me a negative person or a traitor wont help. Listen to what I say and improve upon it for a better Pakistan. Like always without any pressure Pakistan Zindabad!