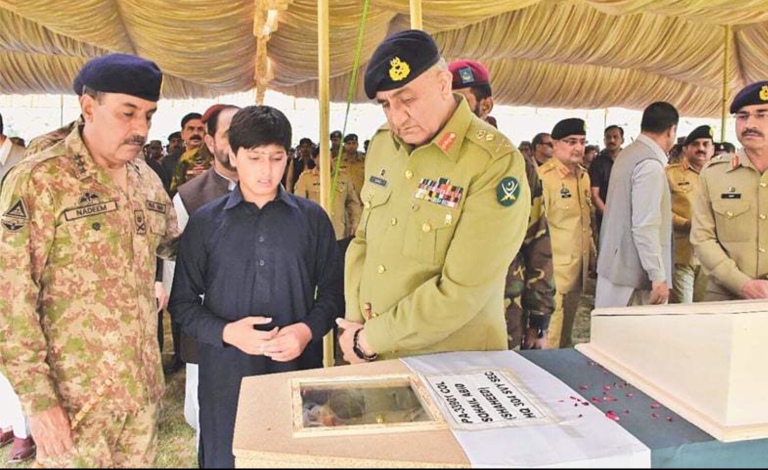 It’s been a long time since I wrote something. Social media kept me busy as well as my vlogs. I kept on struggling with the state that we face as a nation and what can be done to undo what has been done long before our time. They say any prolonged battles are futile and always bring a strain on resources and strategy. The current operation which started with the massacre of APS kids in Peshawar and later started to target political mischief as well immediately began a nationwide operation.

For an Army with limited resources and with growing enemy prowess on both Eastern and Western side of the borders. A country wide operation with not enough political backing was always a risk. Also, I must say that since the operation was not across the board it created a more complex situation for them. Both at strategic as well as tactical level. With every passing day, the face of the anti-state element became clearer. The only major mistake which I feel happened that whilst militarily inroads were made at the same time political gaps as well as social reinforcements should have been done. Though it is correct that it was the political government’s job to support the follow up but it looks like that each of the parties supported the operation selectively and at their own discretion and convenience. Time and again the military and their associated institutions looked isolated.

At the beginning with fresh resolve and resources the strategy to go solo was comprehensible but with a prolonged conflict this was always going to be difficult. These create gaps and fissures and your enemies both foreign and domestic start taking advantage of the same and they did.

I think the problem started with inception of CPEC. Though I am still skeptical of this initiative as earlier written about it. Also, I see China as a fair-weather friend which avoids conflicts not suitable in our case especially off late. Russia was a good alternative but perhaps with their close Indian nexus will take time to develop especially after our regimes in the past took credit for their defeat in the Afghan War.

The growing influence of United states under Trump Administration and their desire to harness the region. It becomes important that the home front should have been put in order. But looks like that as they say that “Enemy of your Enemy is your friend”. All the disgruntled communities seem to get support of encouragement that they seem to get united against a common institution for their own goals.

The operation to rid Pakistan of all such elements who are anti state was and is a must without comprise and especially after sacrifice of our thousands of Soldiers and officers this should see the end of the day. But I feel that the enemies exploit the political gaps which has been left open by our own set of politicians on purpose or by compulsion.

So, it all started with MQM and its leader who chanted slogans openly against the state. Though he asked for forgiveness time and again but it looked like he used this Card to attract attention. But being anti state was a wrong strategy and he was seemingly compelled to take this suicidal course as some of his senior former leaders say out of fear of losing control or the control which was already lost on the ground. He being in exile and with all the blood shed on the ground. His Muhajir support got diluted and hence now he is heard threatening the state and its institutions and back tracking as the moment goes. The good in all of this is such that Muhajirs have been compelled to look for alternates. Lately, MQM of Altaf Hussein which operates mostly out of UK and US is seen chastising the US hard policy against Pakistan and are expecting their comeback based on the same. I personally think that they are dead baggage and would be used and dump soon as they have begun to lose ground support fast as factions emerge in Pakistan amongst them. Lately at least two such moments whereas per reports Altaf Hussein was expecting his supporters to come out lately in the anti-Army rally of PTM. The disappointing turn out saw that PTM and its leaders did not mention Muhajirs much. Also reports are that due to the low turnout Altaf Hussein’s much desired speech could not happen.

The close proximity of the rally in Karachi, expected comeback of an anti-state Altaf Hussein who I personally feel is utterly misguided by his close Coordination Team as being highlighted by few loyalists of his in various conversations with myself of ground realities that Muhajirs are loyal to Pakistan and his strategy of anti-Pakistan will not help in any kind of political comeback of his. But his effort and coincidentally Nawaz Sharif’s statement in Dawn that Pakistan was perhaps a facilitator in Mumbai attacks shows the building nexus against the nation. The originating source as per my report is Hussein Haqqani who is severely disgruntled after what happened with him during last PPP government. The sad part is that some of the politicians for their own survival approach the anti-state views to keep them in contention without realizing that weakening the Army’s resolve or its associated institutions would see a vulnerable Pakistan. We know what happened in Iraq and Libya. But perhaps their own power is more important.

The voter and especially Muhajir community is realizing that the anti-state narrative is non-conducive especially when their fore fathers built the country. They identify that the solution lies to their woes is in a stronger Pakistan within the constitution of the country and a political struggle.

I hope, that right kind of Muhajir leadership only loyal to Pakistan would be allowed to prosper in Pakistan and Muhajirs recognized as the fifth or the sixth major identity of the nation with respect and used for building the nation. Currently, all forces want to see the anti-state elements unite and create ruckus and I fear Karachi could be a center point for which. Looks so with the sentiment portrayed by Altaf’s faction sitting in US and UK.

The institutions must arrest the situation and should start from Karachi where they must arrest the uncertainty as well as disenfranchisement of Muhajirs. Perhaps some kind of committees should be formed as the political divide may see the parliamentary seats diminish for Muhajir vote bank only to add to the current discontent further and will alleviate the anti-state elements further. Committees should be formed with institutions as part of it to see towards rebuilding the structure of the city and communities and rehabilitation. This would arrest any overtures of anti-state who thrive in such environment.

At the same time, equal disposition should be shown towards any anti state positioning and corruption across the board. Sadly, till date PPP seems untouched in Sindh though their corruption is clearly visible. Muhajirs feel singled out. The joke is that only Muhajirs of other parties pay the price when it comes to their accountability. This impression must be dispelled.

How can this confidence can be built is simple I my opinion? A Three-year technocrat government with mandate to take strong decisions and backing Army’s operations both socially and politically on ground. Perhaps time to see more provinces administratively to diminish the fiefdoms created. At least one more province in each of KPK, Sindh and Punjab is a must. Karachi being the lynchpin must be taken as priority as political experiments seem to fail as PSP fail to launch, PTI seemingly low yield and PPP getting elected would cause more misery for people of Karachi as well as upheaval.

At the same time Pakistan must take a strong position internally against all elements damaging Pakistan’s image by conspiring against it as well as with their actions even though they may be in good terms politically with the realm. Close coordination of the Civilians and Pakistan Army is needed more than before as the international pressure increases augmented by internal forces.

Pakistan Army must not be weakened as this is the only and last line of our defense as a nation. Perhaps a relook into the policies or faces is a need. I am sure patriotic Pakistanis will support any such overtures. But key is an across the board operation on merit. Wonder why there is no equal operation in Punjab as like in other parts of Pakistan. Perhaps it’s time to extend the NAP in Punjab as well. This way the impression of a selected approach would be dispelled though I agree that this has to work politically but we saw that both PMLN and PPP used it for their own benefit. This way they have used the most important institutions as a buffer between themselves and the state’s politics which should not have been the case. Ironically, this approach has caused movements like PTM though I feel it’s being fed and supported by those who are chanting certain slogans lately.

The solution lies with the state and its loyalists who need to work together to bring the nation out of this turmoil. At the same time state should allow room for some elements with less heinous postures to return with an understanding. It’s clear a new face of leadership is key like for Muhajirs as the current leadership has disappointed and misguided their followers and blamed all their failures on the state instead of blaming some part of it on themselves as they looted their own people.

There are many good people in the Muhajir politics who can be still organized on a new platform with new faces loyal to Pakistan. I am sure starting from Karachi will take care of the 70% of the problem.

I am sure the readers will agree and support that without Pakistan we are useless. In the past when I wrote I must clear it was challenging the policy not the institutions but only in the interest of Pakistan.

I am sure situation can be salvaged and Pakistan built on strong lines with good relations with all not just with China. Economically, we need to rise but without losing our self-respect.

Lastly my prayers for Col Suhail Raja for his sacrifice and perhaps a message for those who blamed state for Hazara killings. He sacrificed his life for apprehending the killers of Hazaras showing that for state all are same and equally important. My prayers with all those soldiers who lost their lives defending the motherland. I am sure state would find Muhajirs amongst their ranks when they call out. Inshallah.